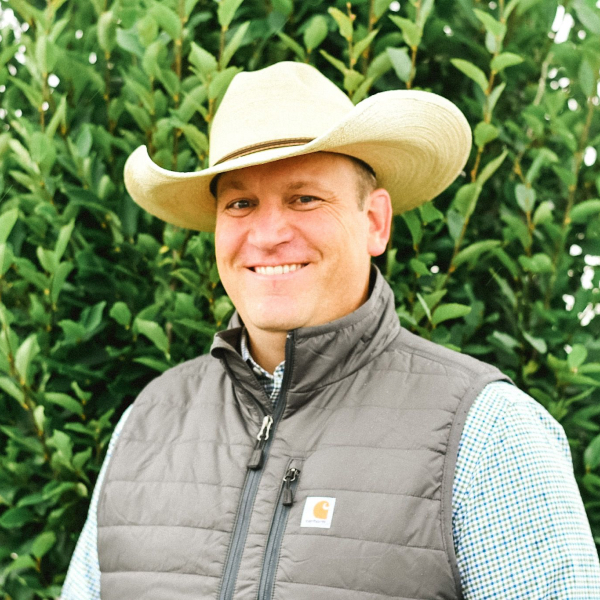 Ross was born to a dairyman in Southeast Idaho. Although his family left the dairy when he was young, his father instilled in him the values of agriculture and a love for its way of life. This led him to pursue a Bachelor of Animal Science from BYU-Idaho.

‍
While attending Brigham Young University-Idaho, Ross worked as a guide and foreman for Halo Ranch Outfitters on a ranch just outside West Yellowstone, Montana where he was able to put into practice the things he learned about herd health and property management. Ross managed day-to-day business operations during six different summers and came to truly love the greater Yellowstone area.

‍
To expand his horizons, Ross moved to Hawaii and became the Operations Manager at Gunstock Ranch on Oahu. Again, he was allowed to flex his management muscles. During almost five years in Hawaii, he ran both the horseback riding and cattle operations. He implemented rotational grazing and a local grass-fed beef program and worked to create better pasture management programs. It was here that he met his amazing wife Aubrey and their first child, Oliver, was born.

‍
In an effort to move closer to his Idaho home, Ross ended up in Colorado as the Palisade Ranch Manager over a ranch for a high-end resort. He was integral in improving the ranch through better management of their pastures and hay meadows. During their five years in Colorado, he and his wife added two precious daughters, Cricket and Daphne, to their family. It was here that Ross had the opportunity to purchase his own herd of cattle. As time went on, Ross knew he wanted to be involved in the industry on a deeper level. He applied and was accepted to the program at Texas A&M Kingsville’s King Ranch Institute for Ranch Management. He was thrilled to entrench himself in the ranching industry for two years straight and considers his Masters of Ranch Management one of his greater accomplishments. As part of his program Ross consulted for many ranches on issues such as precipitation data collection, marketing strategies for calves, cost of gain vs. marginal incremental value of fed cattle, regenerative practices for ranches, and range management and grazing strategies.

‍
Ross is excited to have found a way to continue helping ranches identify the needs of their operations and the tools necessary to address those needs. He fully believes in Redd Summit Advisor’s mission to keep ranching families on the land.